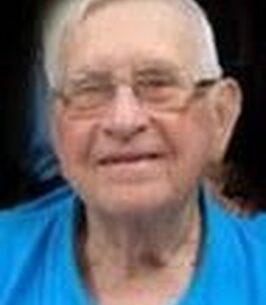 Victor was born on October 22, 1927 in Beech Bottom, WV. He was the son of the late Frank “Mort” and Alverda (Wareham) Echols.

Victor served proudly in the United State Army stationed in Germany as a Medic during WWII. He went on to receive his degree in Chemistry from West Liberty State College. Victor retired in 1980 from Wheeling Pittsburgh Steel as the General Superintendent. Upon his retirement, Victor worked as a consultant for Coke and Chemical Plants until the age of 85 which gave him the opportunity to travel all over the World.
Victor had a passion for many things and his talents knew no limit. Just to name a few to jewelry making, keeping bees from the age of 14, creating beautiful stained glass pieces of art that are hung in the homes of family members, wine making from his own orchard and building his dream house from his own imagination. A man who worked his way up to become the general manager of the mill where he spent over 30 years while raising his four daughters, all the way to the hills of Storm Haven where he retired and called home until his final days. He was known by many as a man that never quit, always rising to the challenge of a new task or adventure. Never a hair out of place and always dressed to the nines for any visitor or outings. He opened his doors and heart to many over his 93 years and found company in friends and family that joined him to reminisce about life’s passing days.

In addition to his parents, Victor was preceded in death by his daughter, Diana Blair, a grandson, Zach Delbrugge and his sister, Jane Mallory.

Please add or view condolences, photos and stories at www.chambersandjames.com where Live Stream Funeral Service will be broadcasted.

All rights reserved. This obituary is also archived at obittree.com