To share your memory on the wall of Thomas Neill, sign in using one of the following options:

Provide comfort for the family of Thomas Neill with a meaningful gesture of sympathy.

Print
Thomas Neill, 92 of Martinsburg, WV, passed away peacefully at 12:20 PM on Wednesday, August 28, 2019 at the Hospice of the Panhandle, Kearneysville, WV with his loving wife by his side.

Thomas was born on March 24, 1927 in Gastonville, ... Read More
Thomas Neill, 92 of Martinsburg, WV, passed away peacefully at 12:20 PM on Wednesday, August 28, 2019 at the Hospice of the Panhandle, Kearneysville, WV with his loving wife by his side.

Thomas was born on March 24, 1927 in Gastonville, PA. He was the son of the late Thomas and Mary Ann (Garry) Neill.

Thomas served devotedly in the United States Army during WWII in the European Theater as a member of the Greatest Generation. After coming back home from War, Thomas went to Wake Forest College where he played football. Furthermore he went on to play semi-pro football with Johnsonburg Shamrocks in PA and NY as a Defense Line Backer. Thomas worked as a line engineer for West Penn Power and later went to work for Penn Line Services until his retirement in 1997. He enjoyed playing golf, baseball and softball. Thomas read daily the Post-Gazette and Tribune Review keeping up on his fondness of Pittsburgh. Many will remember Tom for his dedication to country, his fierce commitment to his defensive line attacking the quarter back and his unwavering work ethic; but most of all, for his unfailing love and faithfulness to his wife, Diana and her family.

A Military Graveside Service will be held privately at Rose Hill Cemetery, Hagerstown, MD with Military Honors by the United States Army and Pastor Corey Bane of the Shenandoah Bible Baptist Church.

Arrangements are entrusted to the care and honor of his great nephew, Eric L. Fithyan and his staff at the Chambers Funeral Home, Wellsburg, WV (304)737-3551.

We encourage you to share your most beloved memories of Thomas here, so that the family and other loved ones can always see it. You can upload cherished photographs, or share your favorite stories, and can even comment on those shared by others.

Posted Sep 03, 2019 at 01:09pm
May the love of God surround you and your family during this difficult time,
May you come to know that the love of God is with you always,

May your memories of Thomas Neill, give you peace, comfort and strength… 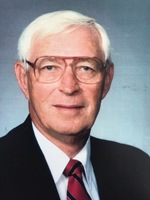